In loving response to Christ, the Servant, the Orphan Grain Train movement encourages and enables God's people to share personal and material resources in bringing Christ's name and character to needy people both far and near. Sometimes that character expresses itself as a word well spoken, sometimes as a bandage well applied, and sometimes as a child well fed. What is Orphan Grain Train?

Orphan Grain Train is a 501c3 Nonprofit Christian volunteer network that shares personal and material resources with needy people in America and around the world. Grain Train volunteers gather donations of clothing, medical supplies, food, Christian literature, and other aid to meet real needs. The Orphan Grain Train movement is a loving response to Jesus Christ’s example as a servant and His love for us.
Orphan Grain Train's Wish List In late 1991 the Rev. Dr. Wallace Schulz, former Associate Speaker of The Lutheran Hour radio broadcast, and his family were sent to Riga, Latvia, to start broadcasting The Lutheran Hour in former communist countries in Eastern Europe. Early the next year, my wife and I had the opportunity to participate in Lutheran Hour Ministries’ volunteer program in Riga.

While there in Riga the idea of how to provide spiritual help and humanitarian aid to hungry souls and bodies resulted in the formation of the Orphan Grain Train. Since then, with God’s blessing and a generous outpouring of time, talent and contributions, Orphan Grain Train has become a hands-on mission project – a national network with regional divisions across the country organized to get necessary help to the endless requests for food, clothing, medical supplies, and Christian-centered literature to Riga, Latvia, and other areas where calamities occur.

More than 3,728 semi-trailer truckloads of food, clothing, medical supplies, and religious materials have been sent to 69 countries and several disaster areas in the U.S. since 1992. All of this is done by volunteers and individual contributors – people who are thankful for their blessings and want to provide a blessing to someone they will probably never see this side of heaven.

Volunteers sort and pack the donated items in our warehouses across the US. Contributors donate money to ship the precious cargoes of hope where most needed. (Eleven dollars sponsors the shipment of one box of aid!) Volunteers at the other end of the journey place these gifts of love into the hands of needy people. We believe that through Christ there is great hope embodied in the efforts of Orphan Grain Train. Read what is going on! Pray for it! Join us!

Sincerely in the Lord, In 1992, Rev. Ray S. Wilke, pastor of Grace Lutheran Church in Norfolk, Neb., volunteered with a group of Lutherans who traveled to Latvia and Russia to help with a church mission. There they met people with “no hope” in desperate need of spiritual, emotional, and humanitarian aid after the breakup of the former Soviet Union. The Latvians begged Rev. Wilke to help them more after he went home and he promised he would. Wilke envisioned a train that would travel through America’s midwest, picking up cars of donated grain along the way, until it reached a port from which the grain would be shipped to feed starving orphans in Eastern Europe. Upon his return to the United States, Wilke contacted Clayton Andrews, president of Andrews Van Lines, a worldwide transportation company, and told his story. Together, they founded Orphan Grain Train. “He came to me and asked, ‘Do you think something can be done?'” says Andrews. “I said, ‘Yes, I know how we can help those people.’ I never hesitated and it took off from there.” As it turned out, railroad operating protocol made the original grain train concept impractical, but Orphan Grain Train was born nonetheless. Within a year Grain Train’s first shipment, a container of clothing and quilts, arrived in Riga, Latvia.

Since 1992, Orphan Grain Train’s 29 regional locations have delivered more than 36 million meals and 3,973 shipments of humanitarian aid to needy people in several states and 69 countries on 5 continents. Orphan Grain Train built a mobile chapel with help from a grant funded by LCMS Disaster Relief division for St. John’s Lutheran Church in Pilger, NE after their church was demolished by a F4 tornado. In October 2017 hurricane Michael ravaged the shoreline of Texas and a majority of Houston. Michael left behind homes and businesses in ruins and lives lost. Orphan Grain Train purchased and delivered 15 shipments of building construction materials and 5 semi-loads of groceries to help stock shelves in a food pantry feeding volunteers and those that have lost everything. In October 2018 OGT had 400 turkeys delivered for Thanksgiving meals to those still living in desperation a year later. The mission of Orphan Grain Train is uniquely dependent upon dedicated volunteers, many of whom have given numerous years of service for the sake of others. Since 1992, more than 4 million hours have been volunteered!

Orphan Grain Train is a recognized service organization (RSO) of the Lutheran Church – Missouri Synod (LCMS). Many shipments have been in cooperation with Lutheran Hour Ministries, LCMS World Mission, LCMS World Relief, and other Christian ministries. 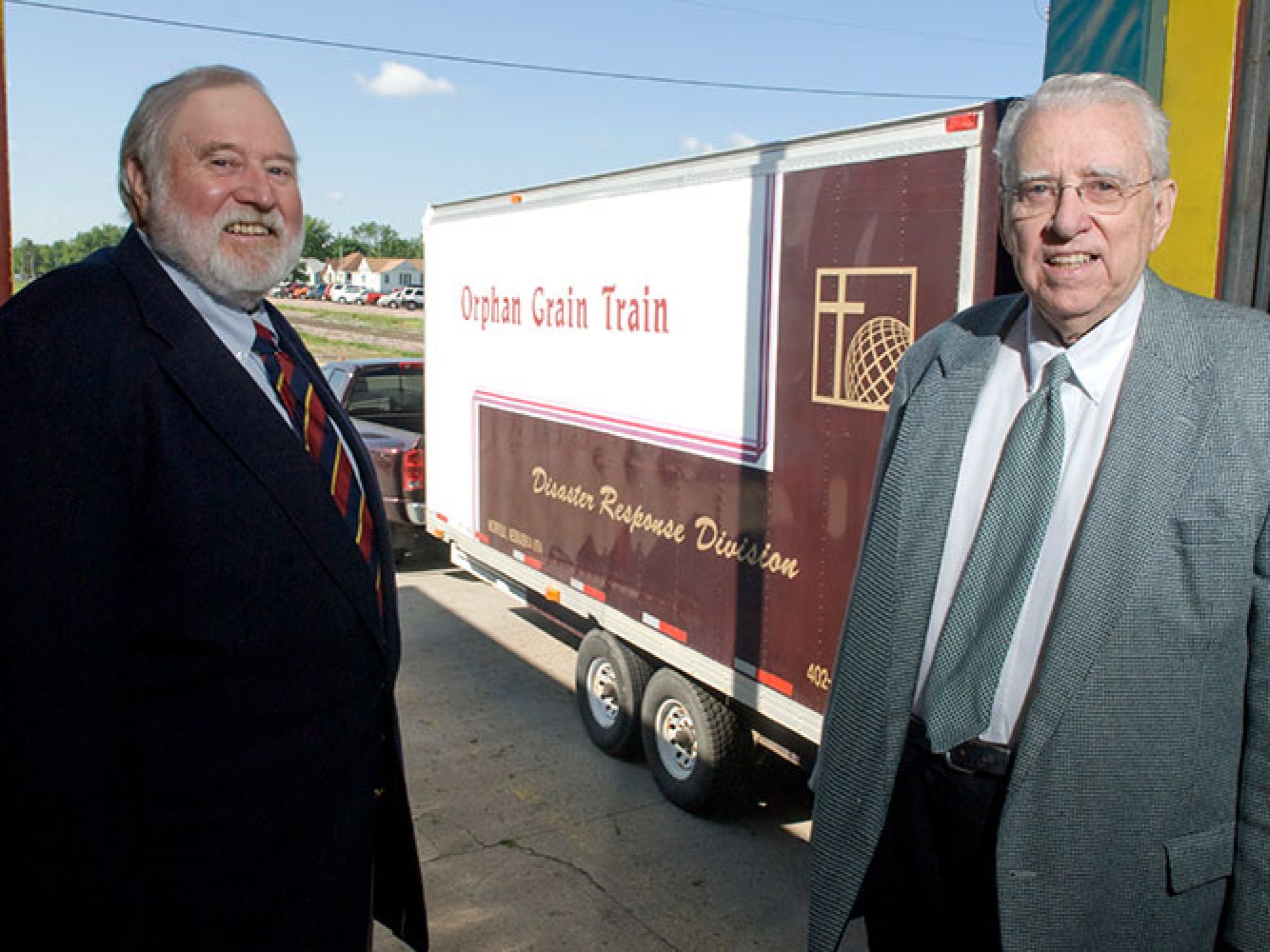 The Passing of OGT's Vice President/CEO

Clayton was owner of Andrews Van Lines, which shipped goods, general commodities and moved military families worldwide. In 1992, Rev. Ray Wilke, Pastor at Grace Lutheran Church, returned from a mission trip to Latvia. Pastor Wilke witnessed the poverty people suffered and promised them that he would help. He asked Clayton, because of his shipping knowledge, if he would be able to help get a shipment to Latvia and Clayton said “Yes, we can do that”. Within a year, the first shipment of clothes and quilts shipped to Riga, Latvia and OGT was born.

Clayton helped fund and establish Hope for the Starving LLC, which facilitates Mercy Meals and other food packing programs to feed the starving worldwide. OGT has shipped over 10 million meals throughout the world. He donated several warehouses for storage of OGT donations. Mr. Andrews donated numerous semi tractors and trailers to OGT and was instrumental in starting OGT Logistics. He financially supported OGT privately in many ways, which are known only to him and our Savior, Jesus Christ.

Orphan Grain Train has shipped to 65 different countries and 28 states with more than 2,654 full shipments delivered to date. Mr. Andrews was very dedicated and believed OGT was his “calling” in life with helping needy people in Third World countries and in the US. OGT staff and volunteers will truly miss him.

He is preceded in death by his wife Vivian and leaves behind two daughters, Jean and Jane, their spouses, 5 grandchildren and 3 great grandsons.